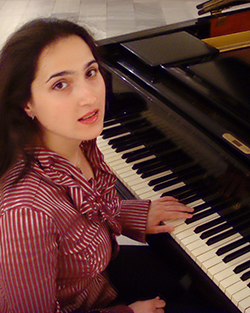 A native of Burgas, Bulgaria, Polina Antonova was born in 1977 and began her piano education at the age of 5. She attended “Prof. Pancho Vladigerov” Music Highschool in her hometown.

Polina Antonova began her public appearance as a pianist with her first solo concert at the age of 13. After completing her Bachelor’s Degree at the National Academy of Music “Prof. Pancho Vladigerov” (NAM), she continued her university education there and earned her Master’s Degree of Music, majoring in piano in the class of Prof. Yovcho Krushev, as well as chamber music in the class of Prof. Viktor Chuchkov.

Polina Antonova has further specialized in piano in the class of Prof. Krushev (2000-2001), music education (2003-2004), and chamber music in the class of Prof. Jeni Zaharieva at the National Academy of Music in Sofia, Bulgaria. She has attended master classes led by Prof. Paolo Pollice, Prof. Costantino Mastroprimiano, and Prof. Atanas Kurtev .

In 2015 Polina Antonova finished with honours her PhD, titled "Dimitar Nenov's Archive: Systematisations, Interpretations, Analyses". In her academic research she was supervised by Prof. Elisaveta Valchinova-Chenodva Dr.Sc of the Institute of Art Studies with the Bulgarian Academy of Sciences http://artstudies.bg/konkursi%20files/PAntonova_pdf/PAntonova_Avtoreferat.pdf

Polina Antonova became chief assistant professor at the Music Department of the  same institute in 2016. Her main fields of research are musicology and history of Bulgarian music (art of composition and musical performance). 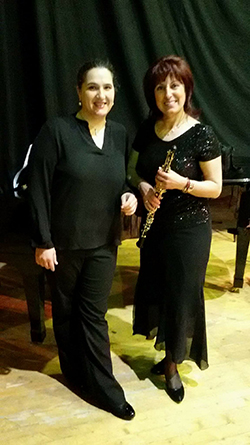 Polina Antonova was awarded 1st Prize - in the category chamber music - at the 2004 "Music and Earth" international competition in Sofia, Bulgaria; in 2003 she finished in second place in the category chamber music, at the "Hopes, Talents, Masters" International Youth Music Festival in Dobrich, Bulgaria. Polina Antonova won 3rd prize at the "Dimitar Nenov" Music Competition for piano in Razgrad, Bulgaria in 1991; in 1990 she was the prize winner for piano at the 12th edition of the "Svetoslav Obretenov" national competition in Provadia, Bulgaria. The same year she was awarded 1st prize for best performance of a Bulgarian work in Burgas, Bulgaria.

Polina Antonova is a dedicated soloist and chamber musician. Together with Fanny Kutzarova, a fellow pianist, she founded a piano duet and the two have given 15 concerts together since 2002.

As a duet, the two of them have given first performances of modern Bulgarian and Jewish music. As part of its project "Modern Bulgarian Intonations", the duet has been supported by the Bulgarian Ministry of Culture and has recorded a CD with the same name.

The duet was an international prize winner in 2003. Together with the composer Simo Lazarov, the two of them appeared at the first of a kind light show with two pianos, digitally processed sound and fireworks. 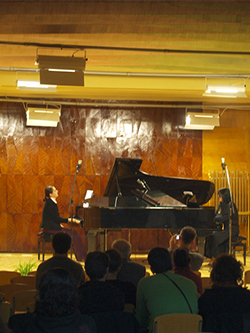 Together with flute-player Petya Stefanova, Polina Antonova was the cofounder of a duo for piano and flute in 2004. They were chosen to appear at the 2005 edition of the European Broadcasting Union Competition.  The two of them have been performing regularly together ever since.

Polina Antonova has also given numerous solo concerts and performances in Bulgaria, Germany, Italy and Poland.

Polina Antonova began her active teaching career in 2002. Between 2003 and 2008 she taught a piano class at the renowned private school of arts "Artis" in Sofia, Bulgaria. Beside piano, Polina Antonova is devoted to teaching theory - solfège, history of music and music theory. Since the fall 0f 2018 she is a teacher of polyphony and harmony at National Music school “Lubomir Pipkov”